The Kings Cross precinct stretches from Ward Avenue in the east to Victoria Street in the west to Manning Street in the north to Kings Cross Road in the south. Special licence conditions apply for certain venues in this area. 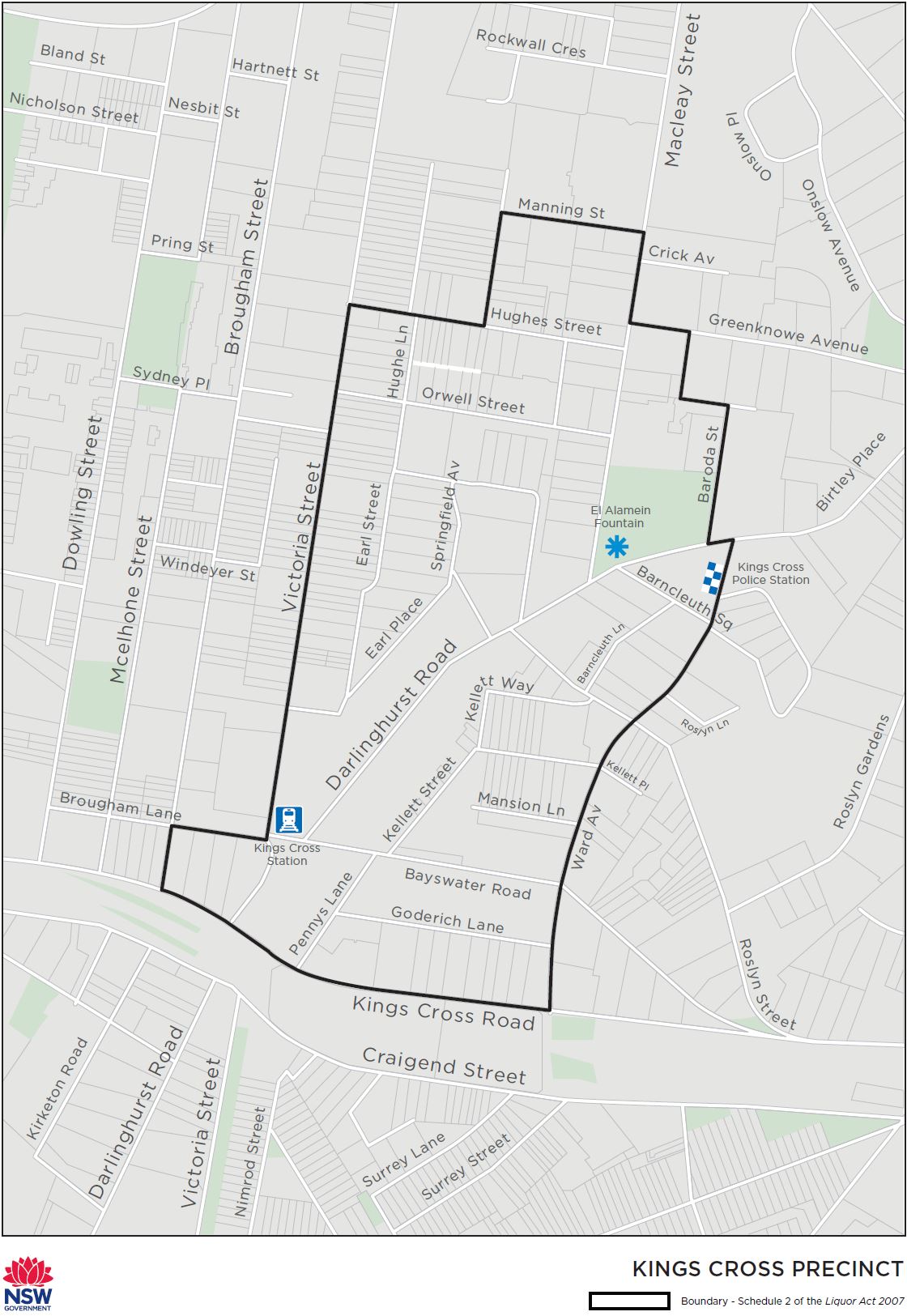 From 1 June 2020, some freeze conditions on existing licensed businesses are being lifted in Kings Cross.

The changes mean applications are open for pubs, clubs, nightclubs and bottle shops to vary their licence by extending trading hours and expanding licensed boundaries to increase overall patron capacity.

Kings Cross licensees may also apply to move a licence for relevant premises to the CBD Entertainment precinct.

Lock out of new patrons at 1.30am and last drinks at 3am

During the late trading period all venues, except small bars, must not serve:

The above does not prevent the sale or supply of cocktails:

Between midnight and 3.30 am, cocktails mustn’t be discounted below the amount specified on the cocktail list.

Glass is prohibited during late trading on any day

No drinks, alcoholic or not, can be sold or supplied for consumption on the premises in a glass after midnight until closing. For 24-hour premises, this applies between midnight and 7am.

‘Glass’ includes any drinking container, such as a bottle or jug, made of glass.

During these periods, all glass must be removed from patrons and public areas.

Venues that must meet this requirement include:

At least one clearly-identified RSA marshal must be on duty from midnight to 3.30am every Friday and Saturday night, and the night before and of public holidays.

Late trading venues that must meet this requirement include:

Find out more about RSA marshals

Certain venues must use an ID Scanner from 10pm until lockout on Friday and Saturday nights, and the night before and of public holidays.

All staff operating scanners, including the licensee, must have completed Privacy training. Penalties apply where training hasn’t been completed.

A venue is required to refuse entry if a person:

Venues with access to information shared via the Kings Cross scanner ID network can refuse entry to patrons banned from other venues.

This ensures venues can make informed decisions about who they admit and prevent known troublemakers from entering.

It’s an offence for a person to provide a false or fake ID. Penalties of up to $5,500 and on-the-spot fines of $500 will apply to anyone using a fraudulent ID.

Find out more about ID Scanners and Privacy training

CCTV systems to be maintained on the premises

A closed-circuit television (CCTV) system must be maintained. The CCTV system must comply with the following requirements:

Venues that must maintain a CCTV system include:

Live entertainment venues in Kings Cross can apply for a later 2am lockout and/or 3.30am last drinks.

To apply, venues must show a genuine market orientation towards live performances, the arts and cultural events and endeavours.

Venues with an approved extension can admit patrons until 2am and/or serve alcohol until 3.30am where they provide live entertainment after midnight.